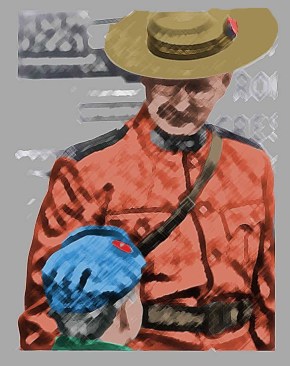 This was me many years ago.  Boy Scout?  Mountie? Father? Son? All of them actually.  This is a rendering of me, Scott Whyte, a member of the Royal Canadian Mounted Police and my eldest son, Greg.  We were marching in the 1988 Remembrance Day Parade in Fort St. John, BC.  This seemed like a timely picture as now in my retirement – I watched our young, local detachment members and Boy Scouts marching in our own town’s remembrance day ceremonies.

Here in Canada, I am a Veteran and I tell most people that I am retired because it begs far fewer questions.  I left the RCMP after 23 wonderful years with a voluntary medical discharge. I wasn’t shot or physically injured – but in a unique Mountie fashion, I dropped the reins to my brain!  My career and life’s train derailed leaving quite a mess.  The doctors diagnosed a case of ‘late on-set Bipolar Mood Disorder Type II’.  I was told that it was a pretty serious mental illness, it would never be fixed, and it would rule over my life from that moment forward.  Grim news for an exit indeed.

One of my caregivers told me that my first priority would be to learn as much as I could about the ‘beast’ that nearly slayed me – that beast was called stress.  I did not have the where-with-all to manage the stressors I had been dealing with.  I had previously never given stress a second thought.  Nobody did!  Eighteen years later, I am far better equipped and have since weathered some stormy times to hone and test my new skills.

I don’t like the word ‘recovery’ because it means, ‘to regain something lost’.  I don’t want to go back to where I was.  Resilience is a word that I can get behind though.  I have found new life in its meaning.  The purpose of this site is to share what I have learned with you.